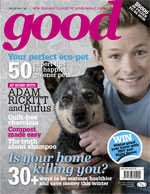 At the end of last year, I discovered an awesome New Zealand magazine at my local Countdown supermarket. Good is a magazine about sustainable living, and it is New Zealand’s first carbon-neutral magazine. Good is a fairly new magazine; it first came out in June last year. I have bought the three most recent issue, and all of the issues can be viewed on the Good website: http://good.net.nz/.

It comes out once every two months, and the current issue features Adam Rickett (star of Coronation Street and Shortland Street) and his dog on the cover, as well as an article on Adam. I spied Good magazine on Shortland Street (NZ medical drama) a few weeks ago, being read by Dr Sarah Potts! Issue 2 featured Rhys Darby from HBO’s Flight of the Conchords (he plays Murray the band manager). Issue 4 featured the gorgeous Keisha Castle-Hughes, star of Whale Rider.

Good is not a beauty magazine, but it does have some good articles on eco-friendly beauty, like this issue’s article on shampoo. I think it is more than just good (ha ha), it is a great magazine, and will continue to buy it.