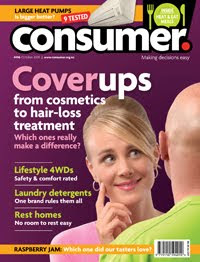 The latest issue of NZ’s Consumer magazine has an interesting article about cosmetic ingredients. Apparently, since July 24 this year, it’s required that all cosmetics sold in New Zealand have the ingredients listed (if they’re not already listed on the back of the product bottle/jar/box/whatever, there needs to be a list of the ingredients in the nearby area). The reason for this is that people with allergies to certain cosmetic ingredients can know what exactly is in everything. Anyway, the Consumer went to several stores where cosmetics were being sold with no ingredients listed. There is also the story of a woman who had an allergic reaction to dianzoydinyl urea, a cosmetic preservative.

Anyway, the consumer discovered that some stores were still selling cosmetics which did not have the ingredients listed. They also found a hair dye at a $2 shop, which contained m-phenylenediamine, which has been banned from being used in hair dyes from some time. It is therefore illegal to sell this product.